Why its important to understand a building’s tax situation when leasing office space.

Most office leases in Manhattan are gross leases meaning that taxes and insurance are included in the base rent and that the landlord will pass through certain increases in building costs. One of those pass through increases are the increase in real estate taxes for their property. Typically, you’d see a provision in a term sheet that states:

“Tenant shall pay its proportionate share in Real Estate Taxes for the Building over a Base Year of 2019/2020.”

Before we dissect what this means, let’s understand how property taxes in NYC are calculated.

Real Estate taxes are calculated using a complex formula that takes many amounts and calculations into account. Essentially the Department of Finance calculates a property’s market value (using the building’s income and a market capitalization rate), establishes an assessed value (as a set percentage of the market value), subtracts exemptions, and multiplies that by the current tax rate. With market value directly correlated to a building’s net income, as the income of a property rises, it’s tax bill would increase as well. Real Estate Taxes are typically billed 2 times per year and due on July 1st and January 1st of each year. So tenants receive a tax reconciliation bill two times each year. 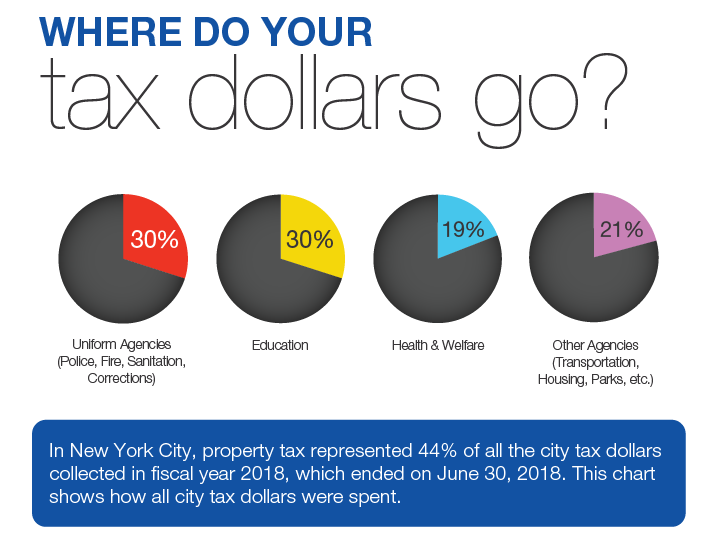 How does a pass through work

The building recently signed a lucrative lease for a significant portion of the building’s exterior signage. This will increase the NOI resulting in another unexpected increase to the building’s taxes that will be passed through to tenants.

The building constructed a beautiful new Class A lobby and moved its lobby from Broadway portion to the side street to create more valuable Broadway retail space. This will likely have a two pronged impact to the building’s Net Operating Income (NOI). First, the building will undoubtedly see a spike in office rents due to the renovation of the lobby and second ownership created a significant amount of prime Broadway retail space. Any tenant with an older base year will have to bear the brunt of a significant tax increase resulting from the additional NOI.

Additionally, the building is currently being assessed by the city at a Transitional Assessed Value which is 15% below its Actual Assessed Value. The Transitional Assessed Value utilizes a formula to phase in taxes over a period of 5 years so that buildings will not be hit with a sudden hike in real estate taxes. Once this 5 year period is over the building will be assessed at its Actual Assessed Value resulting in an additional 15% increase to the building’s taxes that tenants who’ve signed leases within the past 5 years would have to absorb. SOURCE Spaces Commercial Real Estate is a commercial real estate brokerage firm that helps businesses develop a space search strategy, find the right office space, and negotiates the most favorable lease terms. We audit each and every space option to ensure that the physical aspects of the building and space meet our clients needs today and into the future. Additionally, we look beyond the base rent, free rent, and improvement allowance to ensure our clients are protected from more of the predatory clauses in office leases.

To learn more about this and other ways to protect your company from hidden and unexpected leasing costs reach out to us using the form below: